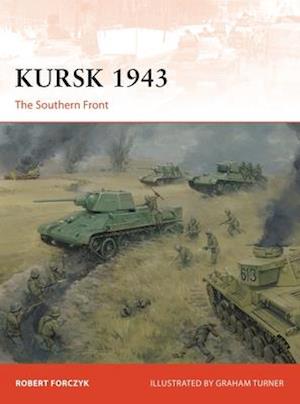 Mauled at Stalingrad, the German army looked to regain the initiative on the Eastern Front with a huge offensive launched near the city of Kursk, 280 miles south-west of Moscow. Armed with the new Panther tank, Hitler and Field Marshal von Manstein were confident that they could inflict another crushing defeat on the Soviet Union. What they did not know is that the Soviets knew about the coming attack, and they were ready. This book focuses on the southern front of this campaign, which featured one of the biggest clash of armour of the warin the battle of Prokhorovka which involved over a thousand tanks. It examines in detail the tactics and mistakes of the army commanders as they orchestrated one of the bloodiest battles in World War II. Using campaign maps, stunning photographs and vivid artwork, this new study, a companion to Campaign 272 Kursk 1943: The Northern Front, examines whether that the German offensive was doomed from the start as it takes the reader through this titanic clash of armour.

Forfattere
Bibliotekernes beskrivelse A few months after Stalingrad, the armies of Hitler and Stalin fought one of the largest armored battles in history at Kursk. This illustrated book examines this titanic struggle. 4 col