- The illustrated history of the German Navy in WWII 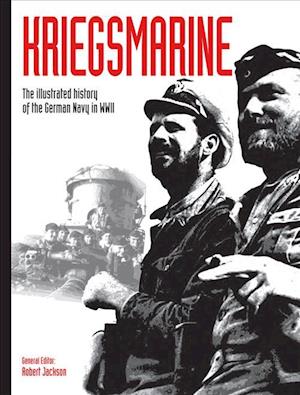 The German Navy, or Kriegsmarine, fought a valiant campaign in World War II. Though her surface fleet was small, German ships such as the Graf Spee, Bismarck and Tirpitz tied down a substantial amount of Allied naval resources for much of the war, and the U-boat fleet almost starved Britain into surrender. Kriegsmarine is a pictorial record of Germany's naval forces before and during World War II: from the rebirth of the U-boat fleet and the new pocket battleships; through the early naval campaigns of World War II; to the U-boats initial success before losses mounted dramatically; and finally the small-scale actions that characterized much of the navy's activity later in the war.A detailed examination of Hitler's navy, Kriegsmarine assess everything from the small coastal vessels to the giant battleships. The book also includes accounts and photographs of the ships in action, such as the Battle of the River Plate and the sinking of the Bismarck. The dramatic story of the Kriegsmarine is told through 250 photographs, many of which are rare or have never been previously published. The illustrative element is complemented by authoritative text written by an expert on naval warfare.

Forfattere
Bibliotekernes beskrivelse With over 200 photos, Kriegsmarine provides a full pictorial history of the German naval forces in WWII, from the U-boat campaigns of the Atlantic to the battleships of the surface fleet. 250 b&w photos; 250 Illustrations, unspecified