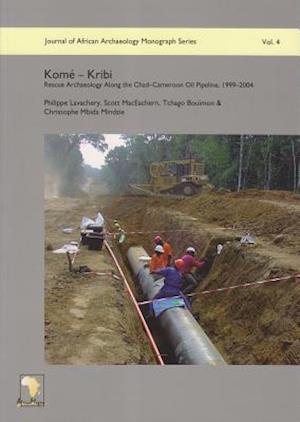 This book presents the first preview of discoveries made in the longest archaeological trench ever dug in Africa. From the forests of coastal south Cameroon towards the dry savannas in southern Chad, the construction of the underground pipeline of the Chad Export Project enabled an international research team to investigate a transect of 1070 kilometers ( ) length. The Kome-Kribi project demonstrates the exemplary application of rescue or preventive archaeology and of cultural heritage management with regard to a variety of involved political and commercial institutions. In areas previously almost unknown archaeologically an impressive number of 472 new sites from the Middle Stone Age to the Iron Age, many considered to be important, were located. Their description, including quantities of cultural materials, a chronological outline based on about sixty radiocarbon dates, and the integration of the new and known evidence in a synoptic consideration of the cultural development of Central Africa, provides a substantial base for further studies and, for those archaeologists less familiar with the region, also offers an introduction into the local prehistory. Finally, the authors have given us a vision on the abundance of information about Africa's past that is still preserved in the ground and scarcely touched, so far.