indgår i serie The New 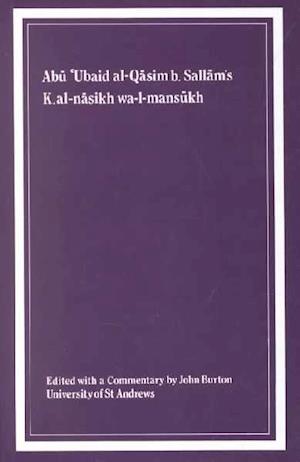 The term nakikh wa mansukh, usually translated as 'abrogation', relates to theories arising from the early exegesis of the Qur'an, in an attempt to resolve apparent contradictions in the Qur'anic text between different statements, especially those bearing on regulations. In such cases, verses later in date are held to modify or even suspend earlier verses. The same principle was applied to contradictions between Traditions forming the basis of the Sunnah. In the lifetime of the author of this volume the question of which should 'abrogate' the other, in the event of conflict between Qur'an and tradition, had already arisen. Abu 'Ubaid's book represents the oldest yet recovered systematic application of 'abrogation' theories to both Qur'an and Sunnah when there is perceived to be a conflict between them. Best known for his work on taxation, the Kitab al-Amwal, Abu 'Ubaid (ca. 154/770224/838) was born at Herat but resided at various centres in the Abbasid Empire; he was a scholar of note in the area of theological, legal and philosophical studies.His book, which antedates the crystallization of the Schools of Fiqh and presents a view of the relation between the Qur'an and Sunnah diverging from that of Shafi'i, is of relevance to studies of the Qur'an and the formulation of Islamic jurisprudence. This edition presents the Arabic text with introductory essay and notes in English.