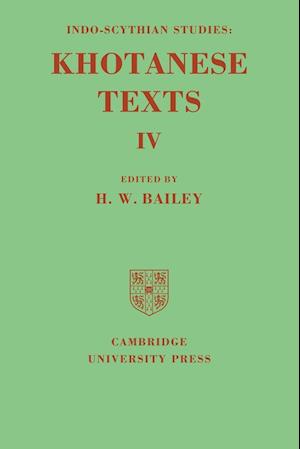 The vast expansion of Indian culture by Buddhists who penetrated through Bactria into the region of modern Kashghar, Yarkland, Khotan, Maralbashi, Kucha and Loulan has been disclosed by the results of expedition sent out in the first decade of this century. Among the numerous documents was a considerable number written in Ancient Khotan, but in a dialect of the Sakas, or Indo-Scythians, who from the first century BC to the third century AD were dominant in North-Western India. Volume I of Khotanese Texts was originally published in 1946, Volume II in 1954 and Volume III, which completed the publication of the longer texts, in 1956. This volume contains the Saka Texts from the Hedin Collection. These documents, partly on paper, partly on wood, were found by the late Sven Hedin and his colleagues in Khotan. They are literary texts, business letters and military orders of the 8th century AD. Professor Bailey has added a translation and commentary to the usual roman transliteration and has also written an introduction.