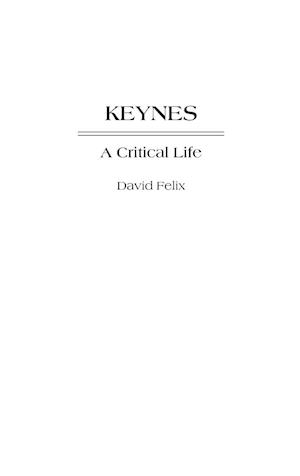 Only a person of Keynes's unique character could have achieved what he did. After teaching neoclassical economics for two decades, he developed an extraordinary theory-extraordinary in that it built upon the theoretical complex he intended to overthrow and extraordinary in that it provided the best guidance for defeating the Depression of the 1930s and managing an economy thereafter. This biography shows how Keynes's personality left its stamp on his ideas, the connections between his all-too-human quirks and his theorizing, between his dominating personality and his success as a policymaker. Although sympathetic to the man, his aims, and his accomplishments, this is the first critical biography of John Maynard Keynes.Based on the mass of material Keynes left behind, including hundreds of letters, the book shows how he thought, rationalized, and acted, as well as the connections between the fallible human and the abstract theory. It shows his transformation from an active homosexual to a contented married man-the relationship giving him a personal and social stability that was important to his achievement. It shows his superb confidence that he was right-even when he completely reversed his previous position-and his unshakable resolution to see his ideas carried out. This is A Critical Life-critical because Keynes's life had a critical impact, and because the book takes a critical look at that life.