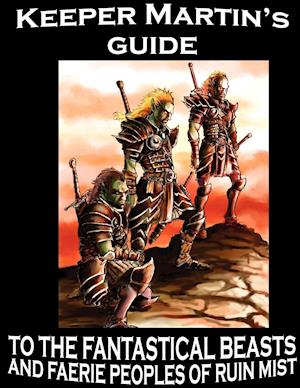 Presenting KEEPER MARTIN'S GUIDE TO THE FANTASTICAL BEASTS AND FAERIE PEOPLES OF RUIN MIST from Robert Stanek, the award-winning author of the #1 best-selling series The Kingdoms and the Elves of the Reaches. Beginning with a thoughtful and informative introduction, progressing through five exhaustive sections featuring thirty fantastical beasts and faerie peoples, this long-awaited compendium to the Ruin Mist phenomenon delivers enough information to satisfy even the most demanding fantasy enthusiast. Not only will readers learn about beasts and faerie peoples featured in the #1 best-selling books, they'll also learn about many wonderful new creatures. This premium quality, full-size edition includes ninety two full-color pages with twenty nine never-before-seen two-page spreads. Also included are dozens of notes by Keeper Martin. www.ruinmistmovie.com.

ABOUT THE AUTHOR: A gifted and distinguished writer, respected and skilled teacher and recipient of our nation’s highest flying honor, the Distinguished Flying Cross, Robert Stanek wrote over 200 books of both fiction and nonfiction in his 30-year career. Although his works were published and/or distributed by nearly every major US publisher, Robert operated against the grain and became the first breakout author of the digital publishing movement. The first to serialize an ebook, the first to e-author a bestseller, and the first to e-author a digital audio bestseller. Robert is the recipient of multiple awards recognizing his outstanding contributions and excellence in writing, and a recent nominee for a Lifetime Achievement award. Translated into 57 languages, Robert Stanek’s books have sold nearly 20 million copies worldwide.

"Stanek augments the beginning of this complex tale with illustrations that are sure to attract fans of graphic novels and classic Tolkien alike." -- VOYA - the leading magazine for YA librarians.