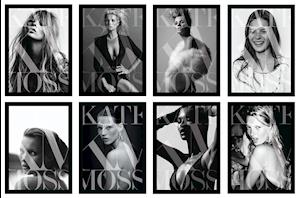 Forfattere
Forlagets beskrivelse Created by Kate Moss herself, in collaboration with creative director Fabien Baron, Jess Hallett, and Jefferson Hack, this book is a highly personal retrospective of Kate Moss's career, tracing her evolution from "new girl with potential" to one of the most iconic models of all time.KATE: The Kate Moss Book will be released with eight unique covers, shot by Mario Testino, Corinne Day, Inez & Vinoodh, Craig McDean, Mert & Marcus, David Sims, Mario Sorrenti, and Juergen Teller and will be shipped to customers at random. Kate Moss began modeling as a teenager and achieved recognition when photographs of her shot by Corinne Day appeared in British magazine The Face. She made her so-called "waif" mark as a counterpoint in the 90s to then-dominant, Amazonian supermodels like Cindy Crawford, Claudia Schiffer, and Linda Evangelista, and, with countless international magazine covers and fashion features, and campaigns for brands including Calvin Klein, Chanel, Bulgari, Dolce & Gabbana, Gucci, and Longchamp, has remained one of fashion's most enduring and influential forces. Moss's magic has been captured by the world's leading photographers, and this volume spans the entirety of her unparalleled career, from model to fashion designer, and muse to icon. Told through images that Moss has personally selected, KATE shows the influence of her collaborations with top photographers and artists over the last two decades, and clearly demonstrates why her career has had, and continues to have, such incredible longevity.Photography by Arthur Elgort, Corinne Day, Craig McDean, David Sims, Hedi Slimane, Inez & Vinoodh, Juergen Teller, Mario Sorrenti, Mario Testino, Mert & Marcus, Nick Knight, Patrick Demarchelier, Peter Lindbergh, Roxanne Lowit, Steven Klein, Terry Richardson and others Including many 'never-before-seen' images from her own archives and those of the illustrious photographers with whom she has worked, KATE is a must-have for anyone interested in one of the most iconic models in the history of fashion media and modern culture.
Bibliotekernes beskrivelse 400 COLOR & B/W ILLUS