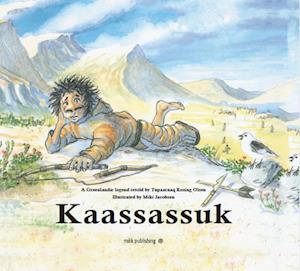 (OBS. findes også på grønlandsk og dansk)Kaassassuk loses his parents while only a baby. He soon finds himself unwanted by the other people in the settlement, who don’t give him much to eat and lift him up from the bench by his nostrils. Only one old man and an old woman are kind to Kaassassuk. One day the old man says that he thinks Kasssassuk should seek out the Lord of Power. He takes the old man’s advice and the Lord of Power gives him superhuman powers. Suddenly the people of the settlement are kind to him but their kindness is false and much too late. So Kaassassuk wreaks a terrible revenge…Kaassassuk is one of the most well-known and loved of the the Greelandic sagas. This book is one of series of four, all of which are retold in richly-illustrated books for children.The stories are sometime scary and bizarre, but they all have a strong moral and are interesting reminders of Greenland’s history and heritage.Fil størrelse: 5093 KB