- Campaigning, Diplomacy and Development in Illyricum, Thace and the Northern World A.D. 527-65 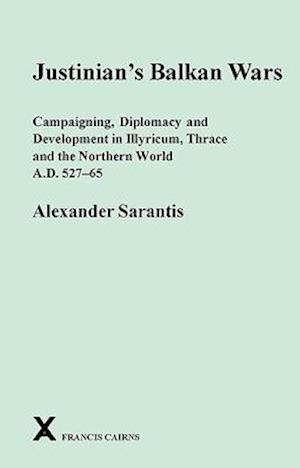 Justinian's Balkan Wars is the first history of military and diplomatic affairs in the Roman provinces south of the River Danube during the reign of the Emperor Justinian (A.D. 527-65). The Emperor's policies in this region have received little attention from modern historians, who have focussed on his struggles with the Sassanian Persian empire in the East, and, in the West, his glorious reconquests of Italy from the Goths and Africa from the Vandals. This comparative neglect reflects the influence of the contemporary historian Procopius, who (following his own bias) viewed the Balkans under Justinian as a backwater denuded of manpower and left vulnerable to the depredations of barbarian raiders. In contrast Justinian's Balkan Wars argues that the Emperor was fully aware of the region's vital strategic importance, and frequently committed more effort and resources there than in other theatres of operation. Justinian's Balkan Wars offers a detailed reconstruction of military and diplomatic relations between the Germanic, Hunnic and Slavic peoples north of the Danube frontier and Justinian's eastern Roman Empire. It uses a variety of contemporary histories and chronicles to chart barbarian raids, imperial campaigns and the receptions of barbarian leaders in the glittering halls of the imperial capital, Constantinople. In doing so it sketches the contours of Justinian's Balkan strategy and its relationship to other theatres of operation such as the Italian Peninsula and the Transcaucasus. The book draws on administrative reforms, epigraphic and numismatic evidence, and the archaeology of settlement patterns to place these historical events in a wider socio-economic and physical context. It shows the importance of infrastructure, logistical preparation, political control and the support of local hearts and minds for successful campaigning in Late Antiquity. Justinian's energetic military, diplomatic, and development policies in the Balkans ensured that the eastern Roman Empire in general prevailed against its barbarian opponents. Hence the eventual loss of Roman control over the majority of the Balkan provinces and their colonisation by Slavic tribes in the 7th c. was by no means inevitable when Justinian died in 565.