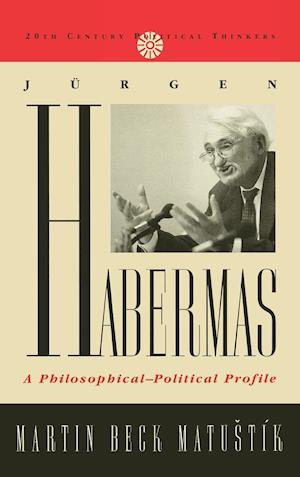 This philosophical-political profile offers the first of its kind intellectual reconstruction of Habermas's defining existential and historical situations, his generational profile and interventions, his impact on as well as the discontents that his life work generates in others. Written as a lively dramatic engagement with major themes of Habermas's adult life in postwar Germany, the entire study occupies a unique place between the standard genres of a biography and a theoretical commentary on the oeuvre. In this work the reader is taken on a journey with Habermas through the 20th-century intellectual and political history from the defeat of Nazism, to the Cold War restoration of the '50s, the student movement of the '60s, the historical revisions of the '70s and '80s, the hope of the post-Wall era after 1989, all the way to the controversies surrounding the allied wars of intervention against Iraq and Serbia in the 1990s. Both beginning and advanced readers of 20th century socio-political thought gain greater insight into the existential, political, and philosophical influences that proved to be formative of Habermas's writing and activism in the public sphere. The first part of the study emphasizes the unfolding, linear view of Habermas's postwar history, punctuated by the major existential and political situations of his young adult life from 1945 to 2000. The second part returns to the same time-span in order to reconstruct Habermas's mature post-Wall intellectual profile in contrast to the profiles of the preceding generation of 1945 and the later protesting generation of 1968. The third part examines the tremendous Habermas-effect exercised on 20th-century thought and public policy. The concluding chapters discuss critically the lasting place as well as the limits of Habermas's achievement in contribution to a development of new critical theory. The book is enhanced by an introduction that provides a historical and conceptual background to the major themes discussed, twelve helpful thematic table