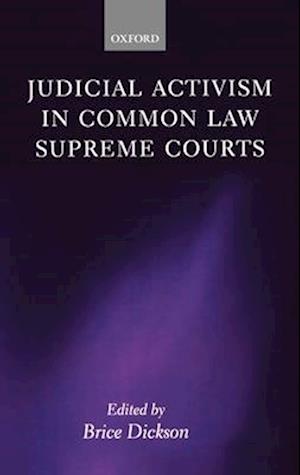 This book examines the way in which judges in the top courts of nine different common law countries go about developing the law by devising new principles to allow themselves to be innovative and justice-oriented, and to ensure that human rights are universally protected. The book surveys the decisions of these top courts over the last generation to determine how 'judicially active' they have been. It seeks to compare and contrast the different experiences and to identify the principles in accordance with which the various courts have decided to develop the law. How do they interpret legislation? What use do they make of standards derived from other countries or from international law? How willing are they to make law in areas which are traditionally thepreserve of elected politicians? The contributors are all experts in their own jurisdictions and have already published widely in the field of judicial activism. The jurisdictions covered include Australia, Canada, India, Ireland, Israel, New Zealand, South Africa, the United Kingdom and the United States. The chapter on the judicial work of the House of Lords anticipates the transformation of that institution into the Supreme Court of the United Kingdom in 2009 and the book as a whole suggests that there is plenty of scopefor that new court to learn from other common law supreme courts about the appropriate limits of judicial creativity.