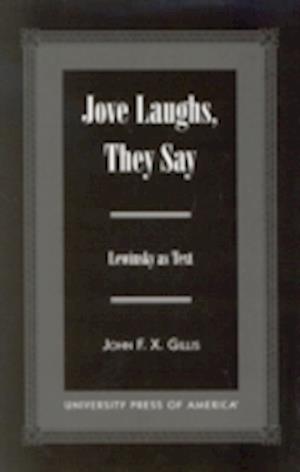 Jove Laughs, They Say: Lewinsky as Text offers an extremely unorthodox approach to the very public and very lengthy Clinton-Lewinsky scandal. The author argues that analysis of the affair was done by experts in specific and, at times, completely unrelated fields. As a result of this ineffectual approach the national conversation was reduced to an unintelligible mess. Jove Laughs recommends viewing the scandal through the lens of literary criticism and literary theory, rather than the traditional political or legal perspective. The work compares the "Talking Points," the three page single-spaced set documents that opponents of the Clinton administration held out to be evidence of an organized conspiracy to obstruct justice, to the historical "Casket Letters" which were used in a similar manner to incriminate Mary, Queen of Scots.

Forfattere
Bibliotekernes beskrivelse This text offers another way of looking at the Clinton-Lewinsky scandal. It views the affair by looking at literary criticism and literary theory, rather than political or legal perspectives, and it compares the "Casket Letters" with the "Talking Points", documents used for incrimination purposes.