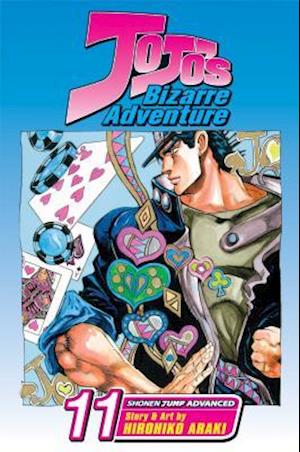 - A favorite of artists such as Yu-Gi-Oh 's Kazuki Takahashi and Shaman King's Hiroyuki Takei - also available from VIZ Media.

- Video games available in the U.S. from Capcom.

- New video game and theatrical movie in production in Japan

- Anime available in the U.S. from Super Techno Arts

- Released quarterly. Around the world, evil spirits are awakening: "Stands," monstrous invisible creatures which give their bearers incredible powers. To save his mother's life, 17-year-old Jotaro Kujo must travel to Cairo, Egypt, where a hundred-year-old vampire waits to destroy his bloodline once and for all... R to L (Japanese Style). Darby the Gambler "Would you like to play a game?" In a caf in the shadow of the pyramids, a well-dressed gentleman challenges the heroes to a game of chance. But what starts as a simple bet turns into their deadliest challenge yet... An epic horror-action-adventure Once there was a mighty bloodline of heroes: the Joestars. In the 1880s, Englishman Jonathan Joestar gave his life to defeat Dio, a megalomaniacal vampire. Now, 100 years later, Dio is back, and Jonathan's descendants must travel to Egypt to destroy their ancestral enemy once and for all. On one side: Joseph Joestar and Jotaro Kujo ("JoJo" for short)...a globetrotting martial artist and his delinquent Japanese-English grandson. On the other side: a vampire and an army of murderers possessed by evil spirits, the monstrous "Stands." But Jotaro and Joseph have "Stands" too...and the stage is set for a terrifying battle as the heroes fight their way around the world Adapted into anime, action figures and video games, JoJo's Bizarre Adventure is one of the weirdest, most influential Jump manga ever (VIZ's version of JoJo's Bizarre Adventure starts with volume 13, the most popular part of the generational storyline, skipping most of the story of Jonathan and Joseph.)

Forfattere
Bibliotekernes beskrivelse In a cafe in the shadow of the pyramids, a well-dressed gentleman challenges the heroes to a game of chance. But what starts as a simple bet turns into their deadliest challenge yet.