- Comedy and Survival in Tudor England 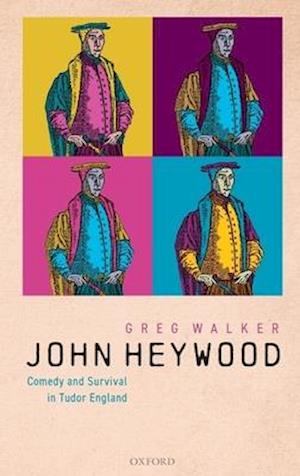 John Heywood was an important literary and theatrical pioneer in his own right, but he is also a revealing lens through which to view the wider tumultuous history of the sixteenth century. He was, through the period from the mid-1520s to the 1560s, as near to a celebrity as Tudor England possessed, famed for his 'merry' persona and good humour. But his public image concealed a deeper engagement with religious and political history. Enduringly resistant to extremism,he variously entertained, counselled, and cautioned his readers and audiences through four reigns, finding himself, as regimes changed and religious policies shifted, successively celebrated, marginalised, anathematised, condemned to death, recuperated, and celebrated once more before finallyretreating into exile on the Continent in 1564. He produced plays at the courts of Henry VIII, Edward VI, Mary and Elizabeth, performed and taught keyboard music, wrote lyric poetry and songs, and from the mid-sixteenth century turned to collecting and publishing highly successful volumes of proverbs and epigrams for which he was remembered well into the seventeenth century. Each of these works provides a subtle, often courageously critical engagement with the politics of its moment.To study Heywood's career takes us beyond the cliches of popular history, beyond Shakespeare and the Elizabethan playhouses, beyond the canonical Henrician court poets and the writers of the Elizabethan 'Golden Age', beyond even the experiences of the century's chief ministers, intellectuals, and martyrs, to a theatrical and literary world less visible in the conventional sources. It opens a window on a culture in which the actions of monarchs, their councillors, and their victims werewitnessed and reflected upon at one remove from the centres of power. And it allows us to re-examine the significance of an individual who deserves our attention, not only for his considerable artistic achievements, but also for the determination with which, often against the odds, he used his talents inpursuit of wider humanist cultural principles for over half a century.