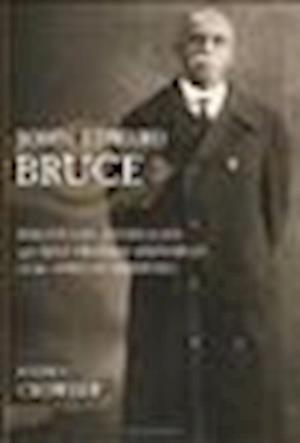 John Edward Bruce, a premier black journalist from the late 1800's until his death in 1924, was a vital force in the popularization of African American history. "Bruce Grit," as he was called, wrote for such publications as Marcus Garvey's nationalist newspaper, The Negro World, and McGirt's Magazine. Born a slave in Maryland in 1856, Bruce gained his freedom by joining a regiment of Union soldiers passing through on their way to Washington, DC. Bruce was in contact with major figures in African American history, including Henry Highland Garnett and Martin Delany, both instrumental in the development of 19th century Black nationalism and the struggle for Black liberation. Close relationships with Liberian statesman Edward Wilmot Blyden and with Alexander Crummell, a key advocate for the emigration of Blacks to Africa, assisted in Bruce's development into a leading African American spokesman. In 1911, Arthur Alfonso Schomburg and Bruce co-founded the Negro Society for Historical Research, which greatly influenced black book collecting and preservation as well as the study of African American themes.