John Donne in the Nineteenth Century 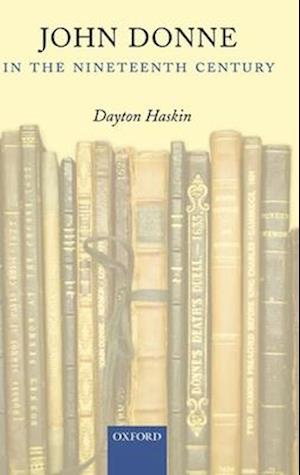 In 1906, having been assigned Izaak Walton's Life of Donne to read for his English class, a Harvard freshman heard a lecture on the long disparaged 'metaphysical' poets. Years later, when an appreciation of these poets was considered a consummate mark of a modernist sensibility, T. S. Eliot was routinely credited with having 'discovered' Donne himself.John Donne in the Nineteenth Century tracks the myriad ways in which 'Donne' was lodged in literary culture in the Romantic and Victorian periods. The early chapters document a first revival of interest when Walton's Life was said to be 'in the hands of every reader'; they explore what Wordsworth and Coleridge contributed to the conditions for the 1839 publication of the only edition ever called The Works, which reprinted the sermons of 'Dr Donne'. Later chapterstrace a second revival, when admirers of the biography, turning to the prose letters and the poems to supplement Walton, discovered that his hero's writings entail the sorts of controversial issues that are raised by Browning, by the 'fleshly school' of poets, and by self-consciously 'decadent' writers of the fin de siecle.The final chapters treat the spread of the academic study of Donne from Harvard, where already in the 1880s he was the anchor of the seventeenth-century course, to other institutions and beyond the academy, showing that Donne's status as a writer eclipsed his importance as the subject of Walton's narrative, which Leslie Stephen facetiously called 'the masterpiece of English biography'.

Forfattere
Bibliotekernes beskrivelse John Donne was famous in his own time yet was virtually unknown in the eighteenth century. Haskin investigates what happened as Victorian readers, prompted by the enormous popularity of Izaak Walton's biography, began to gradually rediscover the poetry, before showing how Donne came to be seen as the discovery of T. S. Eliot and the modernists. 2 black-and-white illustrations