- Conquistadors, Knickerbockers, Pilgrims, and the Hope of Israel 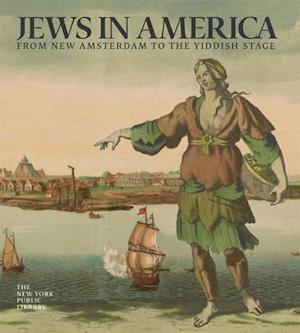 'Jews in America' documents the remarkable story of the Jewish presence in the New World, from the time of Columbus to the 1920s, when the Jewish community in the United States was four million strong and an essential part of American society and culture. Drawing on a mix of contemporary books, manuscripts, globes, maps and engravings from the world-renowned collections of the New York Public Library, Jews in America is a vivid document of everyday Jewish-American life, worship, law, and commerce. It tells the fascinating story of the first Jewish immigrants' arrival in the Dutch colony of New Amsterdam in 1654 (later New York City), Jewish interaction with the four colonial powers in the Western Hemisphere (Spain, Portugal, The Netherlands and England), and on the ideas and beliefs that they influenced. The final chapter looks at the evolving cultural role of Jews in late 19th and early 20th century New York, especially the rise of the Yiddish theatre.

Forfattere
Bibliotekernes beskrivelse Jews in America tells the story of the Jewish presence in America, from the earliest expeditions to the New World through to the arrival in the future United States. 110 Colour, 10 B&W