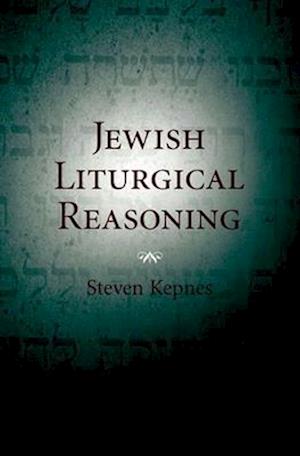 Liturgy, a complex interweaving of word, text, song, and behavior is a central fixture of religious life in the Jewish tradition. It is unique in that it is performed and not merely thought. Because liturgy is performed by a specific group at a specific time and place it is mutable. Thus, liturgical reasoning is always new and understandings of liturgical practices are always evolving. Liturgy is neither preexisting nor static; it is discovered and revealed in everyliturgical performance. Jewish Liturgical Reasoning is an attempt to articulate the internal patterns of philosophical, ethical, and theological reasoning that are at work in synagogue liturgies. This book discusses the relationship between internal Jewish liturgical reasoning and the variety of external philosophical and theological forms of reasoning that have been developed in modern and post liberal Jewish philosophy. Steven Kepnes argues that liturgical reasoning can reorient Jewish philosophy andprovide it with new tools, new terms of discourse and analysis, and a new sensibility for the twenty-first century. The formal philosophical study of Jewish liturgy began with Moses Mendelssohn and the modern Jewish philosophers. Thus the book focuses, in its first chapters, on the liturgical reasoning of Moses Mendelssohn, Hermann Cohen, and Franz Rosenzweig. However, it attempts to augment and further develop the liturgical reasoning of these figures with methods of study from Hermeneutics, Semiotic theory, post liberal theology, anthropology and performance theory. These newer theories are enlisted tohelp form a contemporary liturgical reasoning that can respond to such events as the Holocaust, the establishment of the State of Israel, and interfaith dialogue between Jews, Christians, and Muslims.