- Seventeenth-Century Publishing Sensation. A Critical Edition, Translated and with an Introduction & Notes 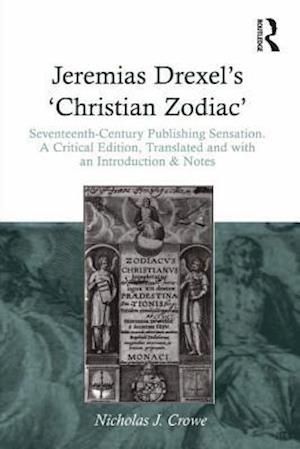 First published in 1622, Jeremias Drexel's 'Zodiacus christianus' (or 'Christian Zodiac') was a remarkable work of religious iconography and spiritual self-help. Raised a Lutheran but converting to Catholicism in his youth, Drexel (1581-1638) was well placed to publish a book that appealed to Protestants as well as Catholics, his 'Zodiac' appearing in multiple reprints, re-editions and translations across Europe during his lifetime and posthumously across the rest of the seventeenth century in an astonishing arc of popularity. The orbit of his readers' catchment was geographically - and denominationally - wide to a conspicuous degree. Drexel was among the most-read authors of that century, a genuine luminary in the culture of the German Baroque, and arguably the most published writer of the period. Offering the first modern translation into English since the early seventeenth century, this critical edition re-acquaints Anglophone audiences with a sample of the spiritual and philosophical writings of a figure whose significant publication record made him a bestseller during his lifetime and for many decades afterwards. As well as addressing issues of spiritual iconography with relation to 'signs of predestination', the book also has much to say about authorship, publishing and the dissemination of ideas. Including a scholarly introduction, full footnotes and an up-to-date bibliography, this new edition does much to help reveal these themes within the complex interconnections between religion, mysticism, iconography and scholarship in early modern Europe.