- Discoveries Made in Exploring the Missouri, Red River and Washita....the Natchez Edition, 1806. a Facsimile. 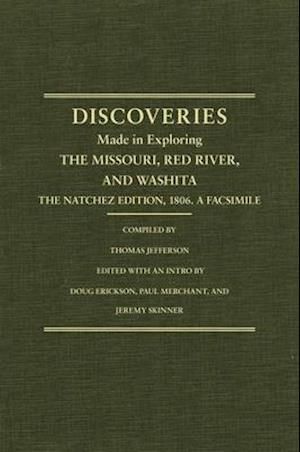 Thomas Jefferson's 1806 Message provided the U.S. Congress, the American people, and interested parties throughout the world with a summary not only of the Lewis and Clark Expedition, but of other expeditions of the time. The value of this Message from the President, in addition to its rarity, is in the wealth of information it provided to individuals in the early nineteenth century about the wilderness in the unknown West, and the insights provided to today's reader.

It is one of the rarest of printed items in the bibliography of early works on Lewis and Clark.

Jefferson's Search for Information. The 1806 Message is an example of the Jeffersonian value of and search for information about the western lands recently acquired from France. The Message brings together the most authoritative accounts of the Louisiana Purchase, combining information from the explorations of Lewis and Clark on the Missouri, William Dunbar and George Hunter on the Ouachita, and Dr. John Sibley's researches on the Red River territory into one report, introduced by Jefferson himself.

Editorial Background. The editors place the document in the context of Jefferson's interest in exploration of the West. They offer comparisons between the expeditions included in the Message and discuss the sources that assisted the leaders of these endeavors. A thorough history of the printer and his press is provided, along with an informative assessment of the location and provenance of known copies of the Natchez edition.

Additional material included. The Natchez reprint of the Message, appearing after versions published in Washington and New York, also includes extracts from Dunbar's journal, as well as significant botanical observations not printed in those earlier editions. As such, the Natchez reprint is distinctly valuable in providing this unique information--a printed facsimile of this item is long overdue.

Two appendices follow the text, including pages from the Washington edition not included in the Natchez edition, and a survey of correspondence of John Sibley available at the Library of Congress. The volume also includes four maps intended to accompany the original 1806 publications.

Four folding maps are included in a special envelope at the rear of the book. The facsimile is augmented by an extensive introduction, two appendices, works cited, index, and seven illustrations. Printed on acid-free paper and bound in rich moss-green cloth with gold foil-stamped spine and front cover. Issued in an edition of only 750 copies.