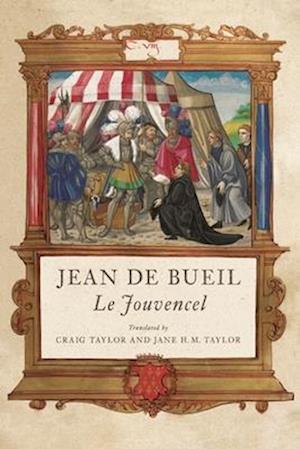 Le Jouvencel is one of the most important and revealing sources for the study of medieval warfare and chivalry. It tells the story of a poor young soldier whose skill at arms enables him to rise through the ranks and eventually marry a foreign princess. Jean de Bueil (1406-1477 wrote the book around 1466, following his retirement from military service, drawing heavily upon his own experiences as one of the most prominent French soldiers of the fifteenth century. The pages of Le Jouvencel are filled with unusually detailed descriptions of military campaigns, sieges and battles, capturing the tactics, weapons and everyday life of the soldier with a vivid eye for detail. Many of the characters, places and events described in the apparently fictional story were actually inspired by recent history, as was revealed in a Commentary written just a few years after Bueil's death by one of his squires, Guillaume Tringant. Jean de Bueil wrote Le Jouvencel to provide future generations of soldiers and military leaders with advice on chivalry, knighthood and the art of warfare. As a result, this remarkable chivalric narrative offers a window into the martial culture of French soldiers during the final stages of the Hundred Years War. This first English translation is presented with an introduction to the text and to Jean de Bueil, and explanatory notes. CRAIG TAYLOR is Reader in Medieval History at the University of York; JANE H.M. TAYLOR is Emeritus Professor of French at Durham University.

Forfattere
Bibliotekernes beskrivelse First full English translation of a major text, narrating the adventures of the Jouvencel whilst interweaving them with advice on military tactics and strategies.