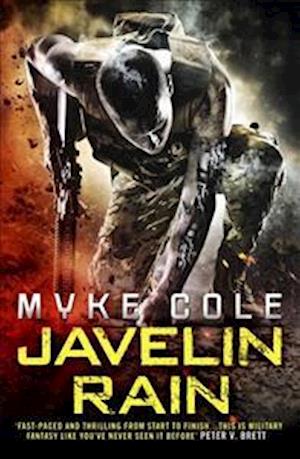 For the dead, war never ends...Javelin Rain is the fast-paced, adrenaline filled sequel to Gemini Cell, set in the same magical and militaristic world of Myke Cole's acclaimed Shadow Ops series. The perfect read for fans of John Gwynne and Brandon Sanderson.'Character-rich and action driven - a Molotov cocktail of human weaknesses and superhuman abilities' - Robin HobbJavelin: the loss of a national security asset with strategic impact Rain: a crisis of existential proportionsJavelin Rain incidents must be resolved immediately, by any means necessary, no matter the cost...Being a US Navy SEAL was Jim Schweitzer's life until the day he was killed.Now, his escape from the government that brought him back from the dead has been coded 'Javelin Rain'. Schweitzer and his family are on the run from his unit and, while he may be immortal, his wife and son are not.It's up to Jim to keep his family safe and free from the clutches of his former masters, whose plans could spell disaster not only for him, but for the entire nation...What readers are saying about Javelin Rain:'Javelin Rain is phenomenal and brilliant. For the first time, Myke Cole has me in tears. I eagerly await the next one''Tough, gritty, fast-paced fantasy. Hard to put down once you start reading''The plot has several unexpected twists and you find yourself rooting for the good guy to somehow figure out a way to prevail'