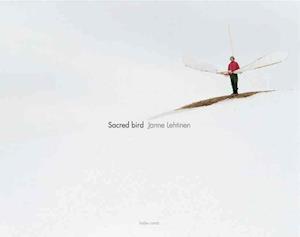 The desire to fly is as old as humanity itself. Icarus dreamed of it, Leonardo da Vinci became one of the first to invent and build flying machines, and for half a century, people have been flying into outer space. Finnish photographer Janne Lehtinen (*1970 in Karhula) has also dreamed of defying gravity. In his series Sacred Bird, he constantly presents himself with a peculiar flying machine, just about to take off into the air like a bird. Yet considering the simplicity of the makeshift machine, the young man's attempts seem as absurd as they are stirring. Lehtinen's father is a famous Finnish glider pilot, and so the photographs are not just an homage to the myth of flying and the Finnish landscape, but can also be interpreted as an autobiographical investigation. The Sacred Bird series, which Lehtinen worked on for several years, is presented for the first time in this volume.