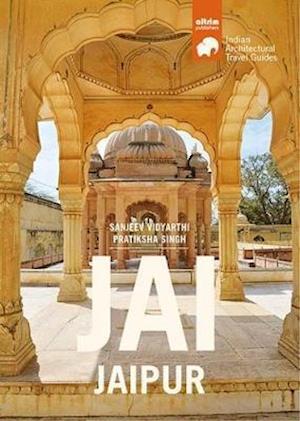 Discover the city of Jaipur, Rajasthans capital. Founded on the XVIII century by the Maharaja Sawai Jai Singh and planned according to Indian Vastu Shastra, in a grid system and uniformly rose pink buildings. Jaipur is a melting pot of Rajput, Mughal and several other cultures and is also the seat of a generous amount of vernacular tradition. Even also the Pink City has retained its unique flavor and old world charm; the visitor will also find a contemporary architecture infusing new forms with the legacy of the past and the spirit of place.The authors, Sanjeev Vidyarthi and Pratiksha Singh growing up in several different regions of India, studied together at the Sir JJ School of Architecture in Mumbai. They moved to the city of Jaipur in 1991 seeking work after graduation. Marrying shortly afterwards, they partied hard while working harder over the next decade or so. Between the two, they accomplished a lot including the foundational work around the establishment of Jaipur's leading design practice of the time, and the simultaneous conception and building of Rajasthan state's first school of architecture, even while finding the time to pursue the vocation of teaching.