- It's Still Tennis, But In A Totally New Format, and with No Gender 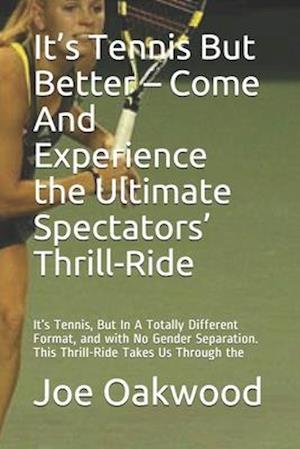 It's Tennis, But In A Totally Different Format, and with No Gender Separation. This Thrill-Ride Takes Us Through the Many Brilliant New Evolving Focus-Drawing Fixtures Each Year Under the Special System, Showing You the Excitement We Would Have. The same old routine, in the tennis world, is an ok thing, an ordinary way. But it's not the only way things could have been structured. This book will take you into an alternative world of tennis, a world where single loss elimination tournaments are no longer the norm, and where the fans' interest is channelled in a different way. Learn how these tricks could bring about something bigger and better. In the real world of the ATP and the WTA, as soon as the round one draw for any tournament comes out, everybody who has drawn one of the top seeds in any round immediately speaks in fake words of loving the chance to play this person, but his coach already books his returning home flight in that same minute, as they know what to expect, and when these flights are sold at good prices. Nobody ever gets to see the 5th to 8th seeds play against each other, or the 9th to 16th go up against each other. These and all below them are only there to make up the numbers. And every player leaves each tournament having lost their final game, apart from the one who wins the final, so 31 of the final 32 are always exposed as not on a winning streak, thoroughly diminished and not left looking extra god-like at all. Zing-hoosh-kazoom Now we have moved through a vortex. It is the year 2028, and the world is a different place. The powers that be have decided to go ahead and try to see if combining ten big bold daring new ideas, some of which are taking inspiration from the best-functioning concepts great days of the wrestling federations, others are all-new, adapter, improver or clip-on ideas, all of whom assemble to take us into a dazzling new world of tennis. See how such a world can bring us all to new heights, and can attract record levels of popularity to the game.For a start, we have ditched the separation between the men and the women, and we knew that choosing the most simplistic route, a merger with the old 15-30-40-game system unchanged would have meant that all the women would fall out of contention, so this is not the route we chose. Instead, whenever a male player plays against a female player, each point won by the female player receives "the pink multiplier", which is initially set at 1.27, and the old 15-30-40-game system is completely ditched in favour of a clever new way of formatting the game. Also, all male players lose their second serve, so each serve that bounces out is a lost point. Other beneficial multipliers will be tested and applied for the very best-looking tennis players, who the fans wish to see more of, and they wish to see them looking as good as can be, all over the camera. This new idea is also launched in the hope of luring some of the world's top models into the sport in a headline-grabbing move. And a special multiplier will be trialled for a few of our early (six to nine) months just for luring big stars of the recent past out of retirement. Also, a very special 5v5 teams event will contain yet another unique multiplier feature, a rolling reduction element, which we invite you to look forward to, as this truly makes the big teams game into a very exciting new highlight of the annual calendar. And for those who cannot yet guess why this is needed, all will be revealed soon.We now live in anticipation of what is to come four fifths of the time, and in total euphoria every fifth week. This way, we are always always looking forward to the future in a positive way. And for those who come to see the game live: a very special treat awaits you every time, as secret Sundays are when the really good stuff happens. The TV taping shows consist of nothing that doesn't contribute to our main aim of making the top 40 all look totally invincible. Packed full of ideas & fun