It's Not Rocket Science 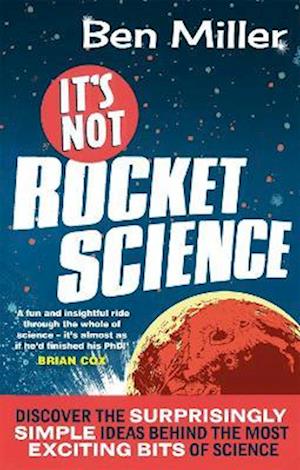 The Top Ten BestsellerBlack holes. DNA. The Large Hadron Collider. Ever had that sneaking feeling that you are missing out on some truly spectacular science? You do? Well, fear not, for help is at hand. Ben Miller was working on his Physics PhD at Cambridge when he accidentally became a comedian. But first love runs deep, and he has returned to his roots to share with you all his favourite bits of science. This is the stuff you really need to know, not only because it matters but because it will quite simply amaze and delight you. 'Let me show you another, perhaps less familiar side of Science; her beauty, her seductiveness and her passion. And let's do it quickly, while Maths isn't looking' - Ben Miller 'This book makes climate change actually seem interesting. Not just important - it's obviously important - but interesting. As a result I bought lots of other books about climate change, something I now regret'- David MitchellBen Miller is, like you, a mutant ape living through an Ice Age on a ball of molten iron, orbiting a supermassive black hole. He is also an actor, comedian and approximately one half of Armstrong & Miller. He's presented a BBC Horizon documentary on temperature and a Radio 4 series about the history of particle physics, and has written a science column for The Times. He is slowly coming to terms with the idea that he may never be an astronaut.