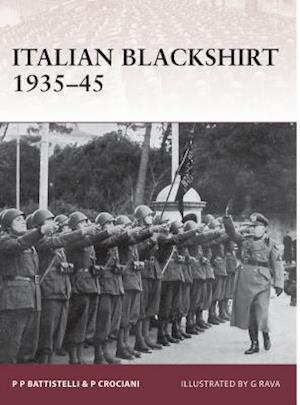 This book documents the experiences of the Italian armed Fascist militia, the Camicie Nere (Blackshirts), from the Italian-Ethiopian war of 1935-36, through the Spanish Civil War to the end of World War II. It explores their origins, development, recruitment, training, conditions of service, uniforms and equipment, battle experience, political and ideological motivation. The Blackshirt legions were raised under army control from 1928, and were employed in 1933 in Libya in counterinsurgency operations against the Senussi tribes; from 1935 in Italy's war against Ethiopia; and, during the Spanish Civil War. Following the outbreak of World War II, the Blackshirts fought in North Africa, Greece, Croatia, on the Eastern Front and finally in Italy itself following the Allied invasion.