- Networks of Culture, Innovation and Dissent 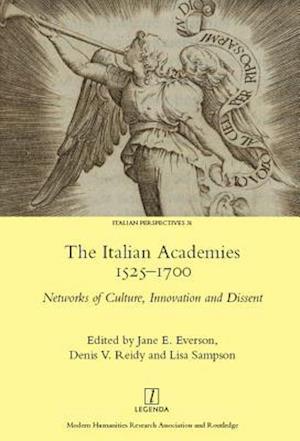 The intellectual societies known as Academies played a vital role in the development of culture, and scholarly debate throughout Italy between 1525-1700. They were fundamental in establishing the intellectual networks later defined as the 'Republique des Lettres', and in the dissemination of ideas in early modern Europe, through print, manuscript, oral debate and performance. This volume surveys the social and cultural role of Academies, challenging received ideas and incorporating recent archival findings on individuals, networks and texts. Ranging over Academies in both major and smaller or peripheral centres, these collected studies explore the interrelationships of Academies with other cultural forums. Individual essays examine the fluid nature of academies and their changing relationships to the political authorities; their role in the promotion of literature, the visual arts and theatre; and the diverse membership recorded for many academies, which included scientists, writers, printers, artists, political and religious thinkers, and, unusually, a number of talented women. Contributions by established international scholars together with studies by younger scholars active in this developing field of research map out new perspectives on the dynamic place of the Academies in early modern Italy.The publication results from the research collaboration 'The Italian Academies 1525-1700: the first intellectual networks of early modern Europe' funded by the Arts and Humanities Research Council and is edited by the senior investigators.