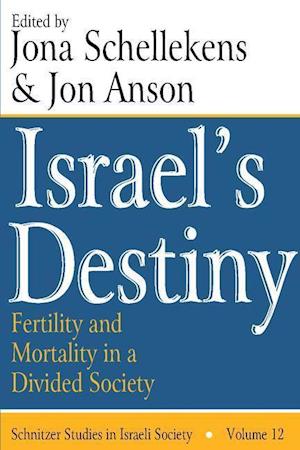 For over a hundred years, demography has been at the heart of the Zionist project, reflected in the goal of creating and maintaining a Jewish majority in Israel and in ensuring the physical continuation of the Jewish people. Demography continues to be an essential issue in the current struggle between Israel and Palestine. Yet in academic discourse, demography is treated as a minor, largely technical side-issue in the social sciences, with little theoretical consideration given to population processes as social processes. Israel's Destiny: Fertility and Mortality in a Divided Society brings together important recent work in this area. The contributions to Israel's Destiny focus on the influence of religion, religiosity, nationalism, and ethnicity on fertility and mortality in Israel.Israel's Destiny is divided into four sections: the first focuses on fertility, particularly Israel's apparently high birth rate when compared with other countries with a similar standard of living; the second looks at patterns of nuptiality and contraception and the way marriage patterns are shaping group boundaries; the third looks at mortality, particularly among men; and the fourth looks at social policy effects of the demographic process.The main focus is that differential reproduction of the population by national and ethnic group, as well as social class--through fertility and mortality--and the social structuring of the population--through marriage patterns--are critical elements in the creation and evolution of Israeli society. The editors' introduction places all these studies in a wider perspective of current demographic research. The volume provides a concise population history of the state of Israel to help the reader put the studies in their proper local and historical context.