Is Arsenic an Aphrodisiac?

- The Sociochemistry of an Element 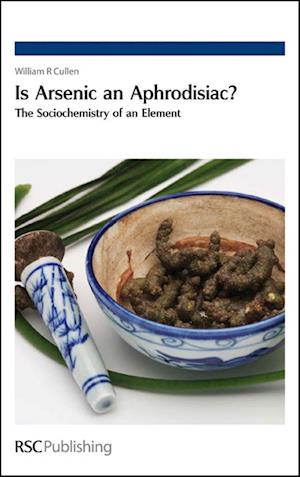 Sex, drugs, rocks, gold, murder, war, mass poisonings, the deaths of Napoleon, Tchaikovsky, Mozart, and others are all linked by one element - arsenic! Arsenic has been around since the beginning of time and the word has become a metaphor for poison with associated shock value. The general public are fearful of any possible exposure to it and yet it holds a certain dark and eerie fascination! The average person has only one idea about arsenic - it is poison - and this reputation has a sound base. Some arsenic compounds are very toxic and have been used with criminal intent from the time of the ancient Romans to the present day. Up until now, there has been no book that covers arsenic with such breadth. This book is a general appreciation of how much the element, arsenic, has become part of our lives in an entertaining style covering the years 1000 BC to the present day. The coverage of the chemistry, toxicology, and medicinal aspects is deliberately kept at a level for the general reader to understand. It covers the way in which this ubiquitous element and its compounds have influenced the lives of the people of the world. The author's objective in writing this book was not to elaborate on the vast chemistry of the element, but to try to reveal to the general reader how the element and its compounds have become embedded in our social fabric, for good and for ill. No other element comes close in this regard and he uses the word sociochemistry to describe this interface between society and chemistry. The book covers a broad range of topics including the use of arsenic in human medicine in many cultures from Chinese medicine to the beginning of chemotherapy. This peaked in the western world in the early 20th century, with Ehrlich's discovery of salvarsan, an arsenic-based cure for syphilis that gave rise to the field of chemotherapy. Salvarsan and related compounds were eventually displaced by antibiotics such as penicillin. Arsenic trioxide has staged a comeback, however, and is being used as a successful treatment for a form of leukemia. Other chapters cover arsenic compounds which were widely used in agriculture and wood preservation during the 20th century and their associated myths as well as arsenic compounds as chemical warfare agents and the resulting stockpile. The topic of arsenic in the environment is discussed in depth - arsenic is all around us - in our soil, our water, and our food, and our bodies have adapted to its presence and it does not usually pose a problem. However, the natural presence of high concentrations of arsenic in drinking water currently threatens the lives of millions of people in India, Bangladesh, Mexico and elsewhere. It also covers mining and pesticide manufacturing which can lead to high local arsenic concentrations in soils, slag heaps and mine tailings which, when located close to human activities, can produce human health risks. Other chapters cover a variety of topics including: "A proposed connection between arsenic and Cot Death (SIDS) which caused panic "The high concentration of arsenic in kelp products-is this harmful? "What about the 237,000 tonnes of arsenic trioxide stored in a mine in Canada? "How toxic is arsenic anyway, and how do you assess the risks of exposure? "How did Napoleon die? These and many other topics are addressed at a level that will result in understanding without delving into too much technical detail or requiring a degree in chemistry. Essential reading for everyone with a general interest in science, this illuminating text covers a broad range of topics.

Forfattere
Bibliotekernes beskrivelse The book covers the huge variety of ways in which the ubiquitous element arsenic and its compounds have influenced the lives of people worldwide. No