- My Journey from Fan to NFL Team Captain 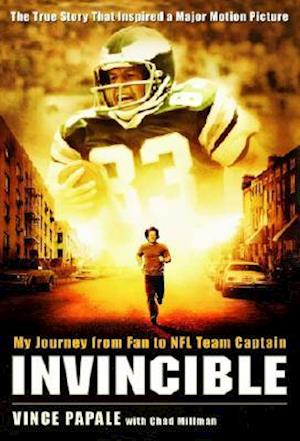 The true story of the NFL's oldest rookie In 1976, Vince Papale was thirty, a former schoolteacher and part-time bartender, and a season ticket-holder for his beloved Philadelphia Eagles. When he heard that Coach Dick Vermeil was holding open tryouts, he decided to give it a shot. Shocking himself and the coaches, he ran an explosive 40-yard-dash in just 4.5 seconds--a world-class time--and was offered a contract on the spot. When he joined the team, Papale became the oldest non-kicking rookie in NFL history, a fan favorite who played for four years and was named a team captain. Invincible is Vince Papale's story, and a tie-in to the Disney Pictures film of the same name starring Mark Wahlberg as Papale and Greg Kinnear as Vermeil. But more than just a tie-in, it tells Papale's story in his own words, covering subjects not included in the film. Like Rudy, Glory Road, and Rookie, it is the true story of an ordinary man who achieves an extraordinary goal.

Forfattere
Bibliotekernes beskrivelse The tie-in to the Disney Pictures release starring Mark Wahlberg tells the true story of the NFL's oldest rookie, Vince Papal who at 30 tried out for the Philadelphia Eagles and was offered a contract on the spot.