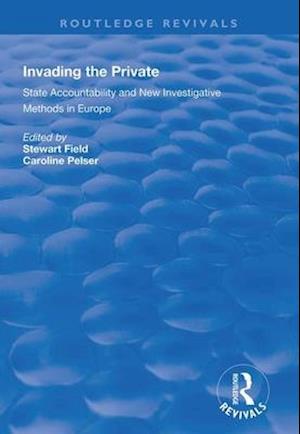 First published in 1998, this volume seeks to examine a range of policing techniques which are new, if not in their conception, then at least in their importance to the form of police enquiries in the late 20th century. Some of them are beginning to be discussed under categories of 'proactive' or 'covert' policing: others are termed 'technological' because they depend intimately on the development of the new information technologies.In much of Western Europe and North America the nature of police investigative methods is being transformed. At the centre of these developments are three main trends. First, there is the increasing use of covert intelligence-gathering techniques such as participating informers, police undercover operations and surveillance proactively targeted at 'suspicious' individuals or networks. Secondly, there is the development of increasingly sophisticated information gathering and processing technologies (DNA) and fingerprint data bases, general intelligence storage systems, computer analysis of open source data, the Internet). Lastly there is an extending exploitation of powers to compel private individuals and companies to provide the state with information about themselves and third parties (including the use of information originally supplied to the state for purposes other than criminal investigation). This book argues that in different ways these trends represent a new invasion of the private sphere by investigative methods and a new challenge for traditional mechanisms for rendering the state's policing accountable such as the trial, the judge and the defence lawyer. Bringing together contributions from sociologists and lawyers in Western Europe and North America, it surveys these developments, considers the regulatory options for their control and their implications for legal principles of privacy and due process.