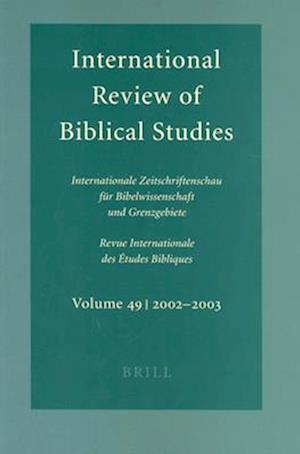 Formerly known by its subtitle "Internationale Zeitschriftenschau f r Bibelwissenschaft und Grenzgebiete", the International Review of Biblical Studies has served the scholarly community ever since its inception in the early 1950's. Each annual volume includes approximately 2,000 abstracts and summaries of articles and books that deal with the Bible and related literature, including the Dead Sea Scrolls, Pseudepigrapha, Non-canonical gospels, and ancient Near Eastern writings. The abstracts - which may be in English, German, or French - are arranged thematically under headings such as e.g. "Genesis", "Matthew", "Greek language", "text and textual criticism", "exegetical methods and approaches", "biblical theology", "social and religious institutions", "biblical personalities", "history of Israel and early Judaism", and so on. The articles and books that are abstracted and reviewed are collected annually by an international team of collaborators from over 300 of the most important periodicals and book series in the fields covered.