- New Yorkers on the 7 Train 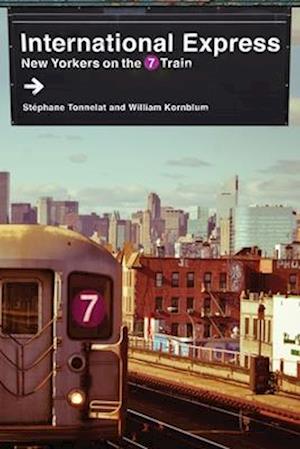 Nicknamed the International Express, the New York City Transit Authority 7 subway line runs through a highly diverse series of ethnic and immigrant neighborhoods in Queens. People from Andean South America, Central America, China, India, Italy, Korea, Mexico, Pakistan, Poland, Romania, and Vietnam, as well as residents of a number of gentrifying blue-collar and industrial neighborhoods, fill the busy streets around the stations. The 7 train is a microcosm of a specifically urban, New York experience, in which individuals from a variety of cultures and social classes are forced to interact and get along with one another. For newcomers to the city, mastery of life in the subway space is a step toward assimilation into their new home.In International Express, the French ethnographer Stephane Tonnelat and his collaborator William Kornblum, a native New Yorker, ride the 7 subway line to better understand the intricacies of this phenomenon. They also ask a group of students with immigrant backgrounds to keep diaries of their daily rides on the 7 train. What develops over time, they find, is a set of shared subway competences leading to a practical cosmopolitanism among riders, including immigrants and their children, that changes their personal values and attitudes toward others in small, subtle ways. This growing civility helps newcomers feel at home in an alien city and builds what the authors call a "situational community in transit." Yet riding the subway can be problematic, especially for women and teenagers. Tonnelat and Kornblum pay particular attention to gender and age relations on the 7 train. Their portrait of integrated mass transit, including a discussion of the relationship between urban density and diversity, is invaluable for social scientists and urban planners eager to enhance the cooperative experience of city living for immigrants and ease the process of cultural transition.

Forfattere
Bibliotekernes beskrivelse Nicknamed the International Express, the 7 subway line runs through a series of diverse neighborhoods in Queens. Stephane Tonnelat and William Kornblum ride the 7 to show how mastery of life in the subway space is a step toward assimilation for immigrants and newcomers. 13 graphs, maps, and photographs