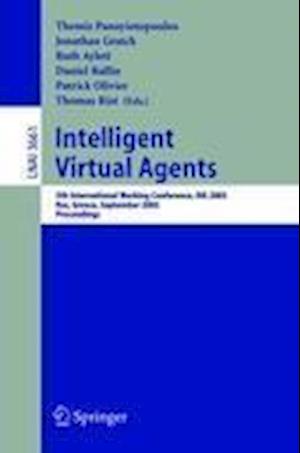 The origin of the Intelligent Virtual Agents conference dates from a successful workshop on Intelligent Virtual Environments held in Brighton at the 13th European Conference on Artificial Intelligence (ECAI'98). This workshop was followed by a second one held in Salford in Manchester in 1999. Subsequent events took place in Madrid, Spain in 2001 and Irsee, Germany in 2003 and attracted participants from both sides of the Atlantic as well as Asia. th This volume contains the proceedings of the 5 International Working Conference on Intelligent Virtual Agents, IVA 2005, held on Kos Island, Greece, September 12-14, 2005, which highlighted once again the importance and vigor of the research field. A half-day workshop under the title "Socially Competent IVA's: We are not alone in this (virtual) world!" also took place as part of this event. IVA 2005 received 69 submissions from Europe, North and South America, Africa and Asia. The papers published here are the 26 full papers and 14 short papers presented at the conference, as well as one-page descriptions of the 15 posters and the descriptions of the featured invited talks by Prof. Justine Cassell, of Northwestern University and Prof. Kerstin Dautenhahn, of the University of Hertfordshire. We would like to thank a number of people that have contributed to the success of this conference. First of all, we thank the authors for their high-quality work and their willingness to share their ideas.