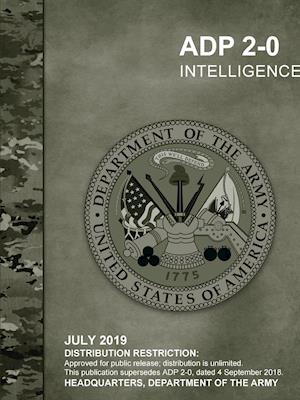 ADP 2-0 provides a common construct for intelligence doctrine from which Army forces adapt to conduct operations. ADP 2-0 augments and is nested with the capstone doctrine from both ADRP 3-0 and FM 3-0. The principal audience for ADP 2-0 is every Soldier and Department of the Army Civilian who interact with the intelligence warfighting function. This publication is the foundation for the intelligence warfighting function and subsequent doctrine development. It also serves as a reference for personnel who are developing doctrine, leader development, materiel and force structure, and institutional and unit training for intelligence. ADP 2-0 uses joint terms where applicable. Selected joint and Army terms and definitions appear in both the glossary and the text. Terms for which ADP 2-0 is the proponent publication (the authority) are marked with an asterisk (*) in the glossary. Definitions for which ADP 2-0 is the proponent publication are boldfaced in the text.