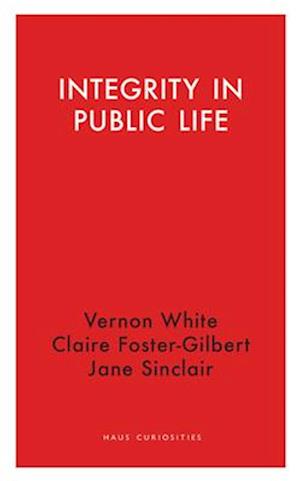 Good governance is one of the UK's fundamental values, and citizens are entitled to expect that public officials, both elected and non-elected, behave according to the highest standards of ethical behaviour. However, such lofty aspirations are not enough to root out corruption. If integrity in public life is to be maintained, the core principles behind it must be constantly sustained and strengthened. This new Haus Curiosities volume, published in collaboration with Westminster Abbey Institute, looks at the place and meaning of integrity in the individual public servant, in public service institutions, and in the wider public they purport to serve. It tries to answer the fundamental questions of what integrity means in public life, what lasting value it has, and why it has such a critical part to play in the constitution of Britain. The book also explores how people in public service institutions can cease to behave with humanity when those institutions deny the individual human spirit. On the other hand, the authors argue for the critical importance of institutions in upholding values when fallible humans forget them, as we have witnessed in the Civil Service's steadfast and stabilising response to the Brexit referendum and its uncertain aftermath. Integrity in Public Life provides a critique of and an essential guide to integrity, leaving the reader with some hope for its continued place in public life.

Forfattere
Bibliotekernes beskrivelse Integrity in Public Life provides a critique of and an essential guide to integrity, leaving the reader with some hope for its continued place in public life.