Integrated Management and Biocontrol of Vegetable and Grain Crops Nematodes

indgår i serie Integrated Management of Plant Pests and Diseases 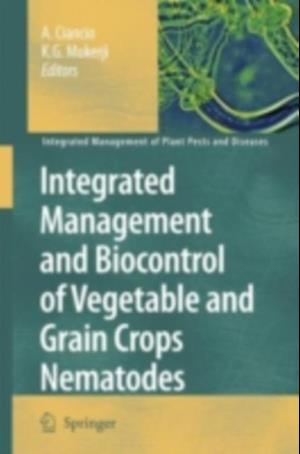 This series originated during a visit of prof. Mukerji to the Plant Protection Institute of CNR at Bari, Italy, in November 2005. Both editors agreed to produce a series of five volumes focusing, in a multi-disciplinary approach, on recent advances and achievements in the practice of crop protection. This Volume deals with nematodes parasitic on plants. Nematodes inhabit the earth since almost half a billion years and will probably remain for an even longer time in the future. They represent a very successful, diversified and specialised animal group, present in all ecological niches in nature. Only a small fraction of species is actually described and, among them, only a reduced number is known to feed on plants. Among them, however, a few species exert an heavy economic impact on crops, representing a severe limiting factor for agricultural productions. This statement explains the attention devoted in last decades to plant parasitic nematodes, and the efforts deployed for their control. As for other disciplines concerning plant protection, nematology is now in a mature stage in which the optimism initially underlining the widespread use of chemicals and fumigants lent space to a more pragmatic, comprehensive and integrated vision of control.