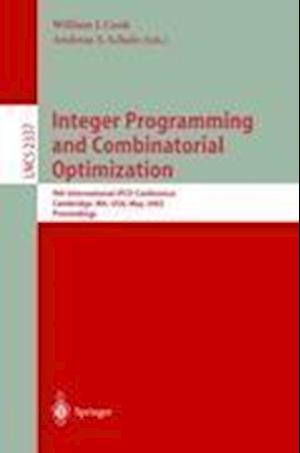 This volume contains the papers selected for presentation at IPCO 2002, the NinthInternationalConferenceonIntegerProgrammingandCombinatorial- timization, Cambridge, MA (USA), May 27-29, 2002. The IPCO series of c- ferences highlights recent developments in theory, computation, and application of integer programming and combinatorial optimization. IPCO was established in 1988 when the ?rst IPCO program committee was formed. IPCO is held every year in which no International Symposium on Ma- ematical Programming (ISMP) takes places. The ISMP is triennial, so IPCO conferences are held twice in every three-year period. The eight previous IPCO conferences were held in Waterloo (Canada) 1990, Pittsburgh (USA) 1992, Erice (Italy) 1993, Copenhagen (Denmark) 1995, Vancouver (Canada) 1996, Houston (USA) 1998, Graz (Austria) 1999, and Utrecht (The Netherlands) 2001. In response to the call for papers for IPCO 2002, the program committee received 110 submissions, a record number for IPCO. The program committee met on January 7 and 8, 2002, in Aussois (France), and selected 33 papers for inclusion in the scienti?c program of IPCO 2002. The selection was based on originality and quality, and re?ects many of the current directions in integer programming and combinatorial optimization research.