Innervation of the Mammalian Esophagus 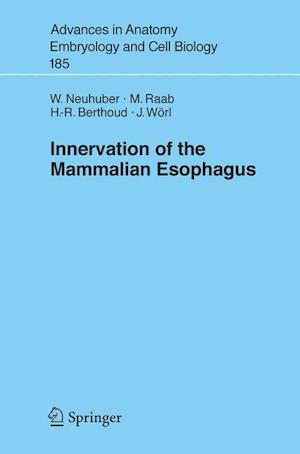 1 Introduction The esophagus is a relatively simple though vital organ. It consists of a two-layered muscular tube whose lumen is lined by squamous strati?ed epithelium. Beyond its role of propelling food from the pharynx to the stomach by a propulsive contraction wave representing the esophageal phase of deglutition (Conklin and Christensen 1994; Jean 2001), it is more and more recognized as a sensory organ from which a variety of respiratory and cardiovascular re?exes can be triggered, thus coop- ating with the larynx in protecting the lower airways from aspiration (Barthelemy et al. 1996; Lang et al. 2002; Lang et al. 2001; Loomis et al. 1997; Medda et al. 2003). In ruminants, there is additional antiperistalsis for regurgitation. During emesis, the esophagus is a merely passive conduit except for some antiperistalsis in its upper part. In the interval between swallows, both oral and aboral ends of the esophagus are tonically closed by the upper and lower esophageal sphincters, UES and LES respectively, while the tubular esophagus is ?accid and partly ?lled with air. Despite this apparent simplicity, neuronal control of esophageal functions is quite complex.