Industrial Relations in the Future

- Trends and Possibilities in Britain over the Next Decade 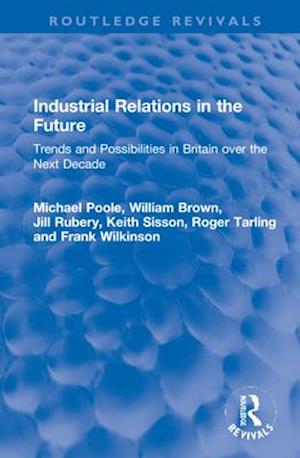 First published in 1984, Industrial Relations in the Future highlights probable developments in Britain's system of industrial relations into the 1990s. It also provides a basis for further and detailed analysis and debate of issues central to the nation's future. Written by distinguished scholars in their respective fields, the three main sections give reviews from three contrasting traditions- mainstream industrial relations, industrial sociology and management, and labour economics. These accounts are highly complementary in the ways in which, in each and every case, issues of collective bargaining, managerial strategy and union response, and the behaviour of governments are all set against a broad backcloth of economic, political, and social changes. The authors see the ultimate outcome as depending greatly on the policies and types of action of organised labour, managements and governments, and possibly of wider social movements as well. This book will be an essential read for scholars and researchers of labour economics, industrial sociology, economics, and public policy.