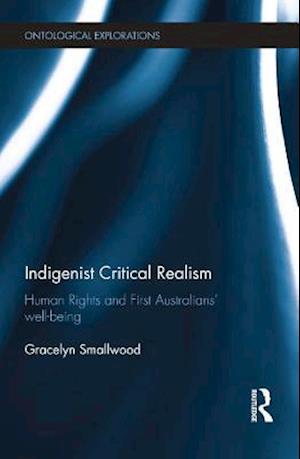 Indigenist Critical Realism: Human Rights and First Australians' Wellbeing consists of a defence of what is popularly known as the Human Rights Agenda in Indigenous Affairs in Australia. It begins with a consideration of the non-well-being of Indigenous Australians, then unfolding a personal narrative of the author Dr Gracelyn Smallwood's family. This narrative is designed not only to position the author in the book but also in its typicality to represent what has happened to so many Indigenous families in Australia.The book then moves to a critical engagement with dominant intellectual positions such as those advanced by commentators such as Noel Pearson, Peter Sutton, Gary Johns and Keith Windschuttle. The author argues that intellectuals such as these have to a great extent colonised what passes for common sense in mainstream Australia. This common sense straddles the domains of history, health and education and Dr Smallwood has chosen to follow her adversaries into all of these areas. This critique is anchored by a number of key philosophical concepts developed by the Critical Realist philosopher Roy Bhaskar. The book advances and analyses a number of case studies - some well-known, even notorious such as the Hindmarsh Island Affair (South Australia) and the Northern Territory Intervention; others like that of the author's late nephew Lyji Vaggs (Qld) and Aboriginal Elder May Dunne (Qld) much less so. Representing one of the first attempts to engage at a critical and intellectual level in this debate by an Indigenous activist, this book is essential reading for students and scholars interested in Critical Realism and colonialism.