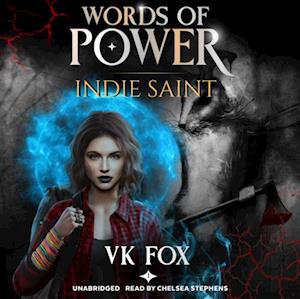 Jane's young. She's broke. Oh, and she just discovered she has supernatural powers so bizarre they may end up killing her.Since she read a biography of Catholic saints and began spontaneously healing the sick and calling down lightning, Jane's day-to-day has become a trippy journey of self-discovery. Lucky thing a pair of magical special agents appear and offer to train her, because it turns out that not only has Jane's life taken a hard turn for the weird, but the fabric of reality is beginning to unravel.Urban legends like Mothman, the Jersey Devil, and Bunnyman are manifesting in a sleepy Pennsylvania town, and they are haaangry.The good news: Jane's new boyfriend is part of an ancient corporation of literary superheroes ready to save the world. The bad news: life expectancy for people with powers kind of sucks.If Jane wants to live long enough to see the year 2000, she'll have to work with her new mentor, a teenaged, angsty King Arthur; her current crush, cuddly god-man Enkidu; and a gun-nun from a neighboring comba-convent to seize her role as a try-hard hero and stop a middle-aged madwoman from ripping a hole in the multiverse.Indie Saint is an urban fantasy adventure with a dose of Sumerian, Arthurian, and modern mythologies, and a dash of romance. Fans of Quentin Tarantino, Tamsyn Muir, and Buffy the Vampire Slayer will enjoy the cheeky writing, toasty romance, and technicolor brawls.