indgår i serie Oxford Studies in Typology and Linguistic Theory 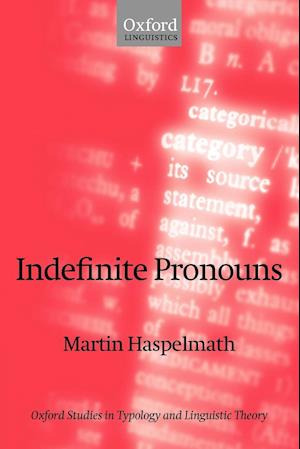 This is an open access title available under the terms of a CC BY-NC-ND 4.0 International licence. It is free to read at Oxford Scholarship Online and offered as a free PDF download from OUP and selected open access locations.Most of the world's languages have indefinite pronouns, that is, expressions such as 'someone', 'anything', and 'nowhere'. Martin Haspelmath presents the first comprehensive and encyclopaedic investigation of indefinite pronouns in the languages of the world, mapping out the range of variation in their functional and formal properties. He shows that cross-linguistic diversity is severely constrained by a set of implicational universals and by a number of unrestricted universals.The author treats his subject matter broadly within the Humboldt-Greenberg tradition of language typology, but also considers the contribution of other theoretical approaches to an understanding of the functional and formal properties of indefinite pronouns. The book is organized into four logically ordered steps: selection of a part of grammar-indefinite pronouns-that can be identified across languages by formal and functional criteria; investigation of the properties of indefinite pronouns ina world-wide sample of forty languages; formulation of generalizations that emerge from the data, summarized in the form of an implicational map; and theoretically-informed explanations of the generalizations, which go beyond system-internal statements, appealing to cognitive semantics, functionalpressures, and universals of language change (especially grammaticalization).