In the Name of Elijah Muhammad

- Louis Farrakhan and The Nation of Islam

indgår i serie The C. Eric Lincoln Series on the Black Experience 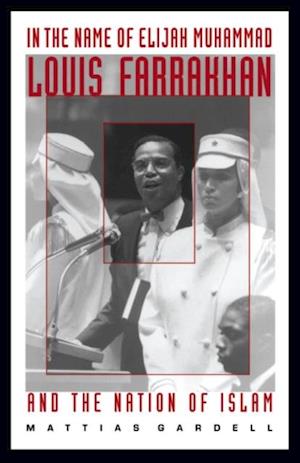 In the Name of Elijah Muhammad tells the story of the Nation of Islam-its rise in northern inner-city ghettos during the Great Depression through its decline following the death of Elijah Muhammad in 1975 to its rejuvenation under the leadership of Louis Farrakhan. Mattias Gardell sets this story within the context of African American social history, the legacy of black nationalism, and the long but hidden Islamic presence in North America. He presents with insight and balance a detailed view of one of the most controversial yet least explored organizations in the United States-and its current leader.Beginning with Master Farad Muhammad, believed to be God in Person, Gardell examines the origins of the Nation. His research on the period of Elijah Muhammad's long leadership draws on previously unreleased FBI files that reveal a clear picture of the bureau's attempts to neutralize the Nation of Islam. In addition, they shed new light on the circumstances surrounding the murder of Malcolm X. With the main part of the book focused on the fortunes of the Nation after Elijah Muhammad's death, Gardell then turns to the figure of Minister Farrakhan. From his emergence as the dominant voice of the radical black Islamic community to his leadership of the Million Man March, Farrakhan has often been portrayed as a demagogue, bigot, racist, and anti-Semite. Gardell balances the media's view of the Nation and Farrakhan with the Nation's own views and with the perspectives of the black community in which the organization actively works. His investigation, based on field research, taped lectures, and interviews, leads to the fullest account yet of the Nation of Islam's ideology and theology, and its complicated relations with mainstream Islam, the black church, the Jewish community, extremist white nationalists, and the urban culture of black American youth, particularly the hip-hop movement and gangs.