In the Beginning, There Was Chaos

- For Better or For Worse 2nd Treasury

indgår i serie For Better or for Worse 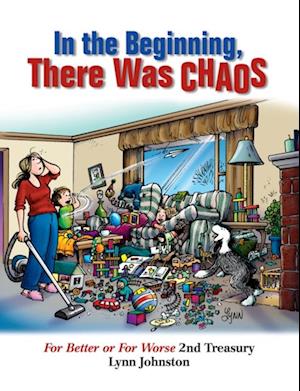 As its title implies, In the Beginning There Was Chaos follows John and Elly Patterson as they tackle the everyday joys and sorrows--and surprises and frustrations and challenges--that arise when raising a young family. In her second For Better or For Worse treasury, Lynn Johnston takes readers back to the 1980s, when Elly leaves her column for a job at the library. As Elly chases her professional goals, she struggles with spending less time at home. Meanwhile, John provides consistent comic relief, as he plays Mr. Mom, breaks his foot with a 25-pound turkey, and gets arrested for trying to steal a potty. Of course, the kids are always in tow--Michael learning that with age comes responsibility and Elizabeth discovering the thrills of kindergarten.Combining strips from Johnston's fourth, fifth, and sixth cartoon collections--Just One More Hug, The Last Straw, and Keep the Home Fries Burning--In the Beginning There Was Chaos reflects Johnston's longstanding tradition of portraying family life with charm, humor, and honesty. Devoted fans will love reliving the Pattersons' younger years, and first-time readers will discover why this endearing foursome is North America's favorite funny page family.In the Beginning There Was Chaos includes Johnston's commentary on the inspiration behind strips, as well as photos and newspaper clippings from the early days, providing a behind-the-scenes glimpse for fans of For Better or For Worse. Join the Patterson family as they find humor in everyday life's challenges.Lynn Johnston was born in Collingwood, Ontario, and grew up in British Columbia. Today, she lives in Corbeil, Ontario. Johnston is the first woman to receive a Reuben Award for Cartoonist of the Year by the National Cartoonists Society in 1985. She has also received the Order of Canada and claims a star on Canada's Walk of Fame.For Better or For Worse has been syndicated since 1979 and was named Best Syndicated Comic Strip in 1992. For Better or For Worse appears in more than 2,000 newspapers in 23 countries, and is translated into 8 languages for a devoted readership of more than 220 million. The strip boasts a lively Web presence at www.fborfw.com.