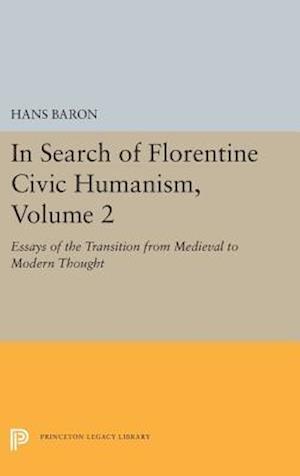 Hans Baron's Crisis of the Early Italian Renaissance is widely considered one of the most important works in Italian REnaissance studies. Princeton University Press published this seminal book in 1955. Now the Press makes available a two-volume collection of eighteen of Professor Baron's essays, most of them thoroughly revised, unpublished, or presented in English for the first time. Spanning the larger part of his career, they provide a continuation of, and complement to, the earlier book. The essays demonstrate that, contemporaneously with the revolution in art, modern humanistic thought developed in the city-state climate of early Renaissance Florence to a far greater extent than has generally been assumed. The publication fo these volumes is a major scholarly event: a reinforcement and amplification of the author's conception of civic Humanism.This book includes studies of medieval antecedents and special studies of Patrarch, Leonardo Bruni, and Leon Battista Alberti. It offers a thoroughly re-conceived profile of Machiabelli, drawn against the background of civic Humanism, as well as essays presenting evidence that French and English Humanism of the sixteenth and seventeenth centuries was closely tied to Italian civic thought of the fiteenth. The work culminates in a reassessment of Jacob Burckhardt's pioneering thought of the Renaissance.Hans Baron is Distinguished Research Fellow Emeritus, Newberry Library.Originally published in 1988.The Princeton Legacy Library uses the latest print-on-demand technology to again make available previously out-of-print books from the distinguished backlist of Princeton University Press. These editions preserve the original texts of these important books while presenting them in durable paperback and hardcover editions. The goal of the Princeton Legacy Library is to vastly increase access to the rich scholarly heritage found in the thousands of books published by Princeton University Press since its founding in 1905.