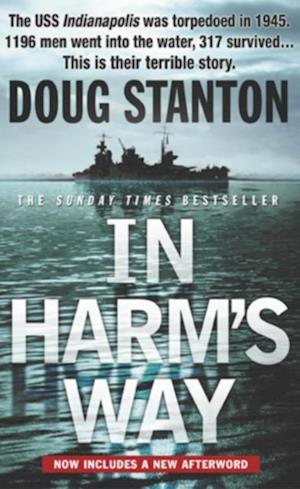 On 30 July 1945 the USS Indianapolis was steaming through the South Pacific, on her way home having delivered the bomb that was to decimate Hiroshima seven days later, when she was torpedoed by a Japanese submarine. Of a crew of 1196 men an estimated 300 were killed upon impact; the remaining 900 sailors went into the sea. Undetected for five days, they struggled to stay alive, fighting off sharks, hypothermia and madness. By the time rescue arrived, only 317 men were left alive. Interweaving the stories of some of these survivors (including the ship's Captain Butler McVay, who would be unjustly court-martialled for the loss of his ship and, twenty years later and tormented by the experience, take his own life), Doug Stanton brings this incredible human drama to life in a narrative that is at once immediate and timeless. The definitive account of a near-forgotten chapter in the history of the last war, In Harm's Way has become a classic.And, some 72 years later, in August 2017, the USS Indianapolis was once again making international headlines - with the news that a marine archaeology team had located the ship's shattered remains:https://www.nytimes.com/2017/08/20/world/asia/uss-indianapolis-paul-allen.html?mcubz=1