In a Time of Total War 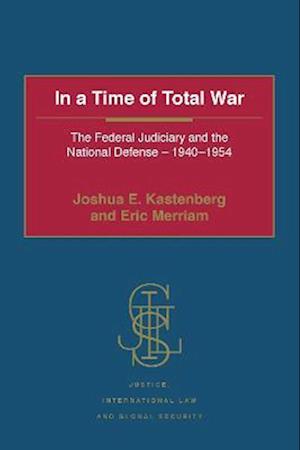 This book is a judicial, military and political history of the period 1941 to 1954. As such, it is also a United States legal history of both World War II and the early Cold War. Civil liberties, mass conscription, expanded military jurisdiction, property rights, labor relations, and war crimes arising from the conflict were all issues to come before the federal judiciary during this period and well beyond since the Supreme Court and the lower courts heard appeals from the government's wartime decisions well into the 1970s. A detailed study of the judiciary during World War II evidences that while the majority of the justices and judges determined appeals partly on the basis of enabling a large, disciplined, and reliable military to either deter or fight a third world war, there was a recognition of the existence of a tension between civil rights and liberties on the one side and military necessity on the other. While the majority of the judiciary tilted toward national security and deference to the military establishment, the judiciary's recognition of this tension created a foundation for persons to challenge governmental narrowing of civil and individual rights after 1954. Kastenberg and Merriam present a clearer picture as to why the Court and the lower courts determined the issues before them in terms of external influences from both national and world-wide events. This book is also a study of civil-military relations in wartime so whilst legal scholars will find this study captivating, so will military and political historians, as well as political scientists and national security policy makers.